The Evolution of the Light Bulb 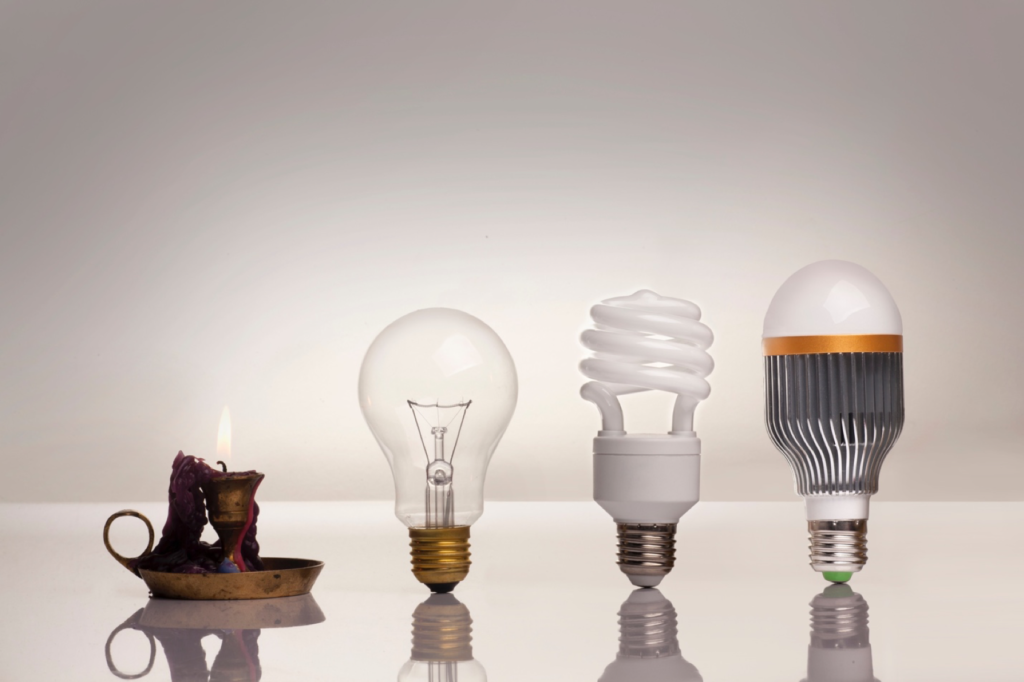 In the early 1800s, a group of inventors sat around a table and discussed an idea that would change homes forever. Their bright idea underwent many changes by numerous inventors over the past 200 years and resulted in the modern-day lightbulb. Let’s pause and take a look at the light bulb’s glow up from the arc lamp to LEDs.

The trouble with the arc lamp is if the gap between your carbon rods is too large, the spark between them flickers and dies. If it’s too small, it produces a minimal amount of light.

This is the bulb many people think of when they think about the first lightbulb.

The heating filament inside of this light bulb is responsible for its light emissions. The filament contains an inert gas that improves upon the arc lamp quality of light.

This version of the lightbulb was expensive to make and didn’t last very long. So inventors set out to make improvements.

AKA the One with Edison. This update was all about improving the filament inside of the light, making it less expensive and longer lasting. The filament went through several editions before landing on a carbonized bamboo version that lasted over 1200 hours. The new and improved incandescent bulb also featured tungsten, a metal that has an extremely high melting temperature and low vapor pressure, making it optimal for a bright everlasting light.

This version of the lightbulb still takes considerable energy for their luminosity. The next iteration, inventors would decide, needed to be more energy-efficient.

The major improvement in this bulb is the addition of a halogen gas (like iodine) to extend upon the life of the tungsten filament. This allowed the filament to heat to higher temperatures without evaporating, which make the light much brighter.

Unlike the regular incandescent light bulb used earlier, a halogen (such as iodine or bromine) is used in the bulb. This improves the life of the Tungsten filament. Also, the illumination is better as the halogens have atoms distributed so the light produced covers a better distance.

An oil crisis demanded homeowners to be more energy efficient. CFLs are brighter and require 25% less energy than halogen bulbs.

Inventors discovered that if they changed the color of the tubing inside of the bulb, the color of the light would change. And thus, colored lightbulbs were created. The same white light is emitted by the phosphor but it’s then colored by the tubing.

These bulbs are a great balance between cost and energy efficiency. However, inventors were on a quest to make the most energy efficient bulb possible, which brings us to our final bulb.

LEDs last longer because they don’t use filaments, which burn out and break over time. These bulbs are a form of solid-state lighting; they use a semiconductor to convert electricity into light in a very small area. They emit light in a specific diction so reflectors and diffusers that normally trap light are needed less than LEDs counterparts.

They typically have the highest price of your bulb options but save up to 80% of the energy used in other bulbs. LEDs also have an extremely small heat footprint, so they can reduce your air conditioning costs.